“Perfectionism is the voice of the oppressor, the enemy of the people. It will keep you cramped and insane your whole life, and it is the main obstacle between you and a sh*tty first draft. I think perfectionism is based on the obsessive belief that if you run carefully enough, hitting each stepping-stone just right, you won’t have to die. The truth is that you will die anyway and that a lot of people who aren’t even looking at their feet are going to do a whole lot better than you, and have a lot more fun while they’re doing it.” ANNE LAMOTT

This is going with me, until I can learn to not look quite so much at my feet.
The winner of NEVERSINK by Barry Wolverton is Nicole Mc.
Congrats, Nicole! If you’d please email me your mailing address, I’ll pass it along to the folks at Walden. Enjoy reading a fishy tale of survival with your boys!
Xoxo,
Kristin 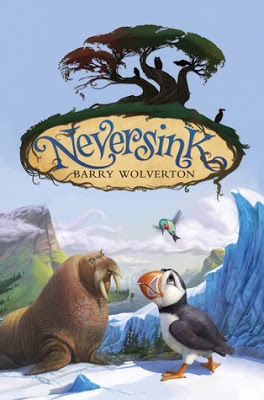 I’m proud to be part of the Neversink blog tour by Walden Pond Press. You’ve probably heard a little bit about Neversink, say here and here and oh maybe here.

I’ve returned from a whirlwind of a weekend in Texas with a handful of kid lit industry professionals. (And ate some amazing handmade puffy tortillas drizzled with warm butter and honey. These are not them.)

Texans know how to put on a conference. I took a few notes and pictures to share with you.
Author/ illustrator Dan Yaccarino opened the conference. He has published over 50 books for children including the new The Fantastic Undersea Life of Jacques Cousteau and is responsible for creating TV shows Oswald and The Backyardigans. He spoke on the importance of saying YES to challenges and of asking questions in order to grow. In short, he was a total delight and should consider motivational speaking. J 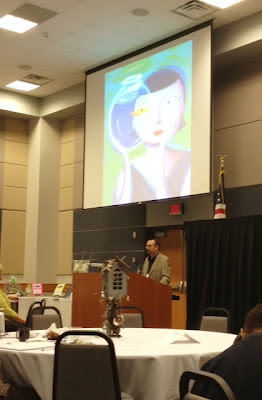 Jen Rofe of Andrea Brown Literary Agency has a soft spot for middle grade stories and “adorkable” characters. (Neversink – which I’m giving away on Friday! – and A Diamond in the Desert are by her clients). She encouraged us to ask “So what?” of our characters and their actions. Why should we care? Does that plot point matter to the story and why? Her power point presentation included examples from literature (Hunger Games) and film (Dirty Dancing). The lift, anyone?
Heather Alexander, an editor with Dial Books for Young Readers, reminded us that we are selling our work and to consider what makes our manuscript unique and fresh. We should examine our manuscript’s selling points, what makes it stand out from others like it. Ms. Alexander read an upcoming picture book, Dragons Love Tacos, and helped us create a sales handle for it. She also used an analogy of the Millennium Falcon to drive her point home. You’ll have to hear her talk to find out why. 😉 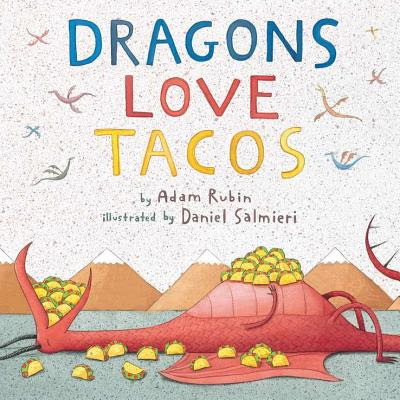 Kathleen Ortiz, subrights director with Nancy Coffey Literary, covered author websites and whether or not you need one. She recommended acquiring a domain name in YourName.com, saying if you do nothing else pre-published, at least secure your name. I had to slip out for the majority of her talk for my manuscript critique with freelance editor Sarah Cloots.
We learned about the ins and outs of jacket design from Charlesbridge art director Susan Sherman. It was fascinating to see how reversing an image, or adding a border, affects cover design and alters the book’s target audience. (ex: Vinnie and Abraham)
Jenne Abramowitz, editor with Scholastic (trade paperback Ghost Buddy etc.), wowed us all with her presentation on chapter books. She said if you want to write for this audience, be prepared to produce a manuscript every 3-6 months and keep the plot linear. Children in this age range (7-10 years) have moved on from easy readers and are discovering fiction. We don’t want to confuse them with complicated subplots and flashbacks.
Connie Hsu of Little Brown Books for Young Readers enjoys editing hilarious or dark humored picture books or middle grade novels, and young adult books that lend themselves to illustration. She focuses on acquiring novelty projects, such as the very cool Kaleidoscope. Ms. Hsu, energetic and fun, gave us a fantastic talk on diversity in literature.
Here’s a picture of me and Mandy taken at the end of the (long) day. Behind us is author Lynne Kelly, whose debut novel Chained releases May 8th, a story of a Indian boy who befriends an elephant. I, for one, cannot wait. And I’m still regretting my choice of dangling earrings below. 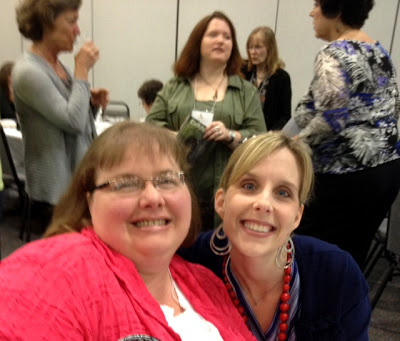 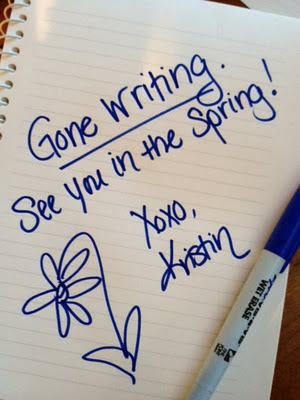 I’m trusting YOU all to behave, eat your vegetables, and fill me in on the latest when I return.
Xoxo,
Kristin
“Whoever watches the wind, will not plant; whoever looks at the clouds will not reap.” Ecclesiastes 11:4
Type Bookstore, Toronto. Bravo.
Zooey Deschanel and Joseph Gordon-Levitt. Adorable since 500 Days of Summer.

Initiated by Julie Hedlund, 12 x 12 in 2012 is a sure-fire way to kick start your writing for the new year and multiply your output. Did you look back at 2011 and wish you’d written more (like me)?
Here’s help.
The mission: Write one picture book draft per month for each of the twelve months of 2012. Your drafts do not need to be polished, but you do need a beginning, middle, and an end.
What a great way to use those PiBoIdMo ideas.
Let me know if you’ve signed up. Thanks to Rebecca for sharing the link!
Xoxo.
Kristin 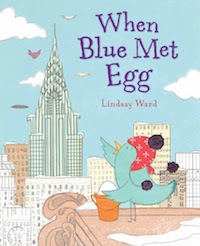 That’s sure to be a classic.

A foldout bird’s-eye view of Manhattan and the Brooklyn Bridge—rendered in an airy cut-paper composition that features scraps of test answer sheets and a New York City map—is a highlight of Ward’s (Pelly and Mr. Harrison Visit the Moon) story about a kindhearted, stocking-capped bird. When Blue mistakes an errant winter snowball that lands in her nest for an egg that’s lost its mother, she snaps into action. Toting her tiny white charge in a bright orange pail, Blue embarks on a months-long search high and low, uptown and downtown, canvassing her fellow birds. The trip yields treasures like carousel rides and hot dogs, but no mama for Egg, who starts to shrink once warmer weather rolls around. Happily, spring provides a sunny conclusion. Those familiar with New York will recognize skyline landmark buildings, the Statue of Liberty, Central Park, and other stops in this uplifting Big Apple adventure. And Ward offers a plethora of fun visual details—Bird posting “Lost Egg” signs; Bird and Egg seated in a box at the opera—along the way. Ages 3–5. Agent: Andrea Brown Literary Agency. (Feb.)

Congrats to Ms. Ward and to Blue, whose sunny outlook I already adore.
I think I will hug her and squeeze her and call her George. 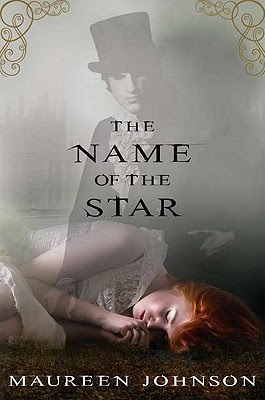 Last night, I began THE NAME OF THE STAR by Maureen Johnson. At dear son’s basketball practice no less. (Thanks, Mandy.) I’m only on page 82, but I may have made a few clicks online to see about enrolling in a study abroad program in England next semester. They allow children, correct? They’ll be good and quiet. No trouble at all . . . *wink*.

I finished Erin Morgenstern’s debut, THE NIGHT CIRCUS, at one o’clock yesterday morning. I enjoyed the story and its present tense. I loved being swept up in the circus–the sights, the sounds, the caramel scents. The curious magic and many mysteries surrounding her characters kept me turning pages. The author is a brilliant wordsmith and has a great imagination. That said, I wanted to love it more than I did. Honestly, I was a tad confused by the end (it was late). Regardless, I’m still amazed by her skill of weaving so many fantastical threads together, from differing points of view. I loved Bailey’s character best. Worth a read. 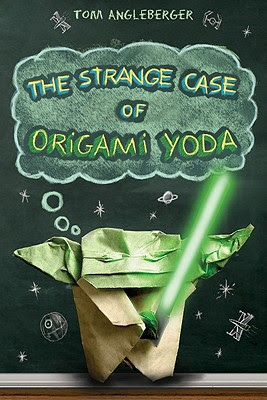 And THE STRANGE CASE OF ORIGAMI YODA is my car line read this week. I’m a bit behind on this because I have three elementary aged boys under my roof and we arm-wrestled for it we did. A witty and fun read, a compilation of several short stories make it an easy one to turn to when you only have a few moments at a time. Like me, right now.
Happy Wednesday.
Xoxo,
kristin