I was discouraged two days ago.

A wee bit last night.
Then I read about people like Stephen Parrish.
Wow.
Thanks, Janet Reid, for the link. 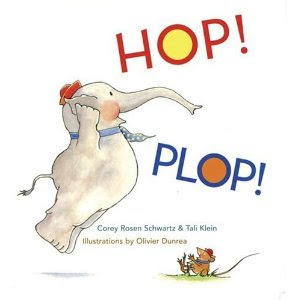 Corey from Thing 1 and Thing 2 has a motivational post about wanting to be a writer. It puts some numbers to the whole “well then, just write” mantra. 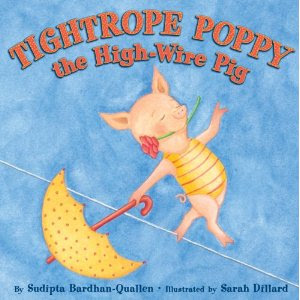 The difference? Corey writes one solid manuscript per year and says that Sudipta writes 10. But Corey goes on to give even more crazy percentages, but I’ll let you read them for yourself.
The bottom line? Write.
And submit. For me, this is hard, hard. As one writer friend told me, “They won’t come knocking on your door.” I have to take a deep breath and go for it.
To quote my mother-in-law: “Can’t never could do
anything, but Try did.”
Or something like that. 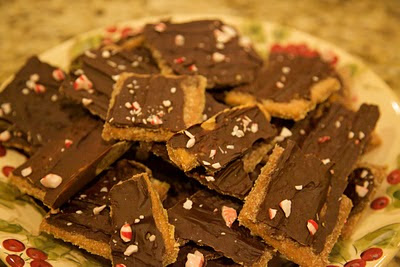 I first saw the recipe for this on Cheryl Klein’s blog. I added the crushed peppermints because:

1. Who doesn’t love peppermints and chocolate?
2. I was in a real pickle. I needed some cookies for a Christmas cookie swap and fast.
These would make great Valentine’s treats too. And if you have small kids at home, you can probably make these without going to the store. The ingredients are staples in most households with preschoolers. Plus they can store for a long time in an airtight container or in the freezer. (That is, if you have more willpower than we do.)
Graham Cracker Goodness

Preheat oven to 350 degrees. Line a 10″ x 15″ cookie sheet with tinfoil. Place crackers flat on the cookie sheet so that they’re all touching each other and so that they extend right to the edges. (Use pieces of crackers if necessary to make it work out.) 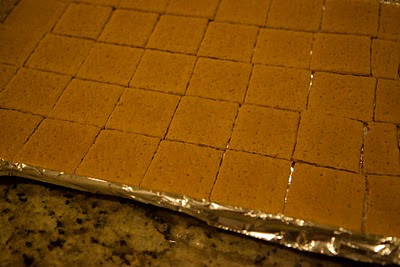 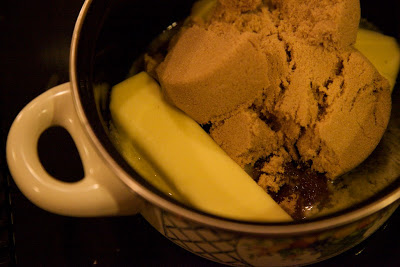 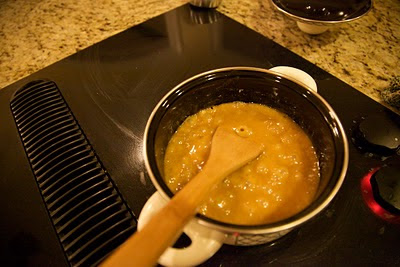 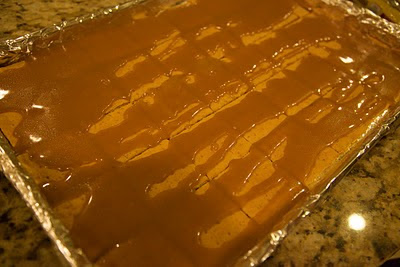 Put in the oven for 5 minutes, or until bubbles form all over.
Find your nearest tattooed chef with homemade paper/Scotch tape apron and begin pounding peppermints like there’s no tomorrow. Set a timer, so you don’t forget your goodies during the mint crushing frenzy. 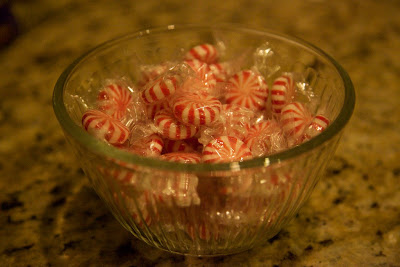 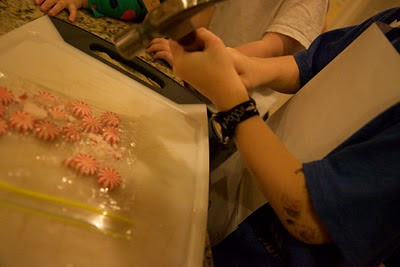 Pull out the cookie sheet and sprinkle chocolate chips on top. Put in the oven for an additional minute, then take it out and spread the chocolate to the edges.
Sprinkle on the crushed mints. Isn’t it pretty? 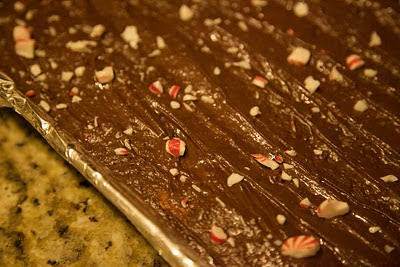 Let it cool. Put in the freezer for 3 hours (or more), then take out the frozen sheet and peel off the tinfoil. Break the bark into pieces. Can be frozen, stored in a tin, or consumed – my personal favorite. Enjoy. Happy Valentine’s Day to all. 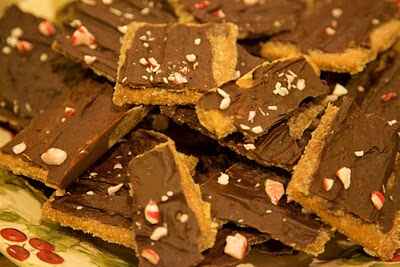 Scholastic is launching a comeback of Ann M. Martin’s best selling series, The Baby-Sitters Club with a prequel thrown in! 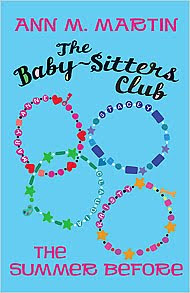 Here’s the link to the press release. Two hundred and thirteen titles?! Don’t believe me? Look here. Holy guacamole! That’s a ton of books! Interestingly, Ms. Martin wrote over 60 of the original series herself. (That’s still a ton of books.)
“David Levithan, the editorial director at Scholastic and an editor of “The Baby-Sitters Club” said the publisher decided to bring back the old series because of requests from fans who wanted a comeback. “This whole generation of girls who had grown up reading ‘The Baby-Sitters Club’ were now teachers, librarians or mothers,” Mr. Levithan said. “And at any opportunity they had, they let us know they wanted them back. We couldn’t go to a convention without having women come up to us and say, ‘You’ve got to bring these books back.’”
Hee. Hee. I LOVE it. Claudia was my favorite character. I loved her artsy style and mismatched earrings. Maybe she had more guts than me. And remember Stacey always dotted her i’s with hearts?
If you need a refresher, click here for a fun trip down memory lane. Be sure to tell us who your favorite character was and why! 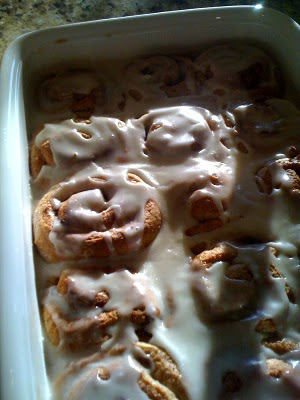 Something about being snowed in makes me want donuts or cinnamon rolls. Maybe since that’s what my mom and the neighbor kids’ mom always served up on sledding days. Who knows. I’ve baked entirely too much these last three days. (And a huge brisket is going in the oven shortly.)

Sure, chocolate cupcakes and cinnamon rolls have helped me get over missing the Austin SCBWI conference with rockstar speakers NATHAN BRANSFORD and CHERYL KLEIN. And my much anticipated critique with Sara Lewis Holmes of OPERATION YES fame. I can follow on Twitter (#AustinSCBWI) and chalk it up as a lesson learned in planning trips a la winter. The upside is, the director is mailing my critique, so it’s not a total loss. Yay for that, right?
Back to snow days and baking. This here book, PEACE LIKE a RIVER by Leif Enger, stayed with me for months after I finished.

The prose is breath-taking, and it put me on a serious hunt for the nation’s greatest cinnamon rolls. Enger’s description of 11 year-old Reuben Land’s sister Swede’s rolls will have your mouth watering. I’d never thought to add a tablespoon or two of coffee into the glaze.
The story itself revolves around Reuben, an asthmatic boy from Minnesota who has good reason to believe in miracles. “Here’s what I saw,” Rube warns his readers. “Here’s how it went. Make of it what you will.” And Rube sees plenty. His brother is, after all, on the run from the law.
And miracle of all snow day miracles, I have found the perfect cinnamon roll. Hearty thanks to the fabulous Pioneer Woman. (All her recipes are fabulous.)
Note: I cut this recipe in half and still cut way back on the butter and sugar. Also I use half whole grain flour. It makes me feel better. But you do what you want. 😉 Just be prepared for melt in your mouth goodness.
Pioneer Woman Cinnamon Rolls

Mix the milk, vegetable oil and sugar in a pan. “Scald” the mixture (heat until just before the boiling point). Turn off heat and leave to cool 45 minutes to 1 hour. When the mixture is lukewarm to warm, but NOT hot, sprinkle in both packages of Active Dry Yeast. Let this sit for a minute. Then add 8 cups of all-purpose flour. Stir mixture together. Cover and let rise for at least an hour.After rising for at least an hour, add 1 more cup of flour, the baking powder, baking soda and salt. Stir mixture together. (At this point, you could cover the dough and put it in the fridge until you need it – overnight or even a day or two, if necessary. Just keep your eye on it and if it starts to overflow out of the pan, just punch it down).When ready to prepare rolls: Sprinkle rolling surface generously with flour. Take half the dough and form a rough rectangle. Then roll the dough thin, maintaining a general rectangular shape. Drizzle 1/2 to 1 cup melted butter over the dough. Now sprinkle 1 cup of sugar over the butter followed by a generous sprinkling of cinnamon.Now, starting at the opposite end, begin rolling the dough in a neat line toward you. Keep the roll relatively tight as you go. Next, pinch the seam of the roll to seal it.Spread 1 tablespoon of melted butter in a seven inch round foil cake or pie pan. Then begin cutting the rolls approximately ¾ to 1 inch thick and laying them in the buttered pans.Repeat this process with the other half of the dough. Let the rolls rise for 20 to 30 minutes, then bake at 375 degrees until light golden brown, about 15 to 18 minutes.For the frosting, mix together all ingredients listed and stir well until smooth. It should be thick but pourable. Taste and adjust as needed. Generously drizzle over the warm rolls. Go crazy and don’t skimp on the frosting. 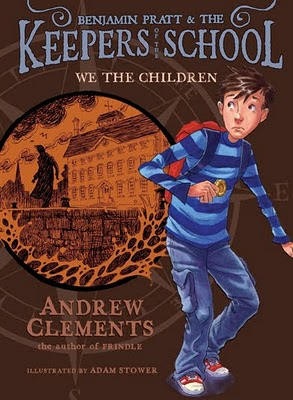 Prolific author Andrew Clements (Frindle, Room One) is a hero of mine. His upcoming middle grade adventure series, Benjamin Pratt and the Keepers of the School, sounds like a whole lot of fun. Isn’t the cover, illustrated by Adam Stower, great?

The first book, We The Children, is slated to release this spring. Read the first chapter here. Here’s the teaser trailer:
And sight. 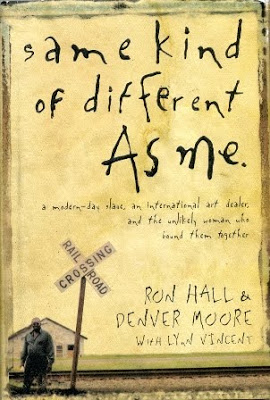 I highly recommend this book.
It was in my top three of amazing reads of 2009. Frankly, it changed the way I view the world.
Rumor has it movie in the works.
It’s for grown-ups.
And it’s follow-up was released before Christmas: What Difference Do it Make?

Anastasia Suen stressed the importance of storyboarding for writers in her intensive picture book workshop. I heard her speak last Spring, and she had those of us in attendance, storyboard Harry the Dirty Dog (which my three year old calls “Dirty Harry”) in 32 thumbnail sketches.

Storyboarding helps pace your picture book and plan those all important page turns.
Kim Norman, author of Crocodaddy and Jack of All Tails, has a complementary storyboard available for download on her website full of helpful tips for writers. She has even split it into the three story arcs – beginning/ middle/ resolution.
For a sneak peak at an illustrator’s thumbnail sketches, hop over to Anna Alter‘s blog Painting Bunnies to see work on her newest book, Disappearing Desmond.
You don’t have to be an artist though, to storyboard. Stick figures will do. It’s all about pacing text, conflict, interactions, and flow of story into 32 pages. 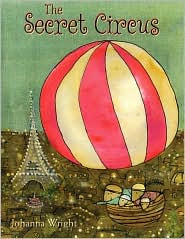 Click here for a fabulous interview with Johanna Wright, Illustrator and Author of children’s books, in which she talks about her writing and painting process. Her most recent work is The Secret Circus (Roaring Brook Press, March 31, 2009).

I love this book, own it, and was lucky enough to see it in person on the shelf in Paris’ Left Bank Shakespeare and Company bookshop. (To put it mildly, I was giddy.) 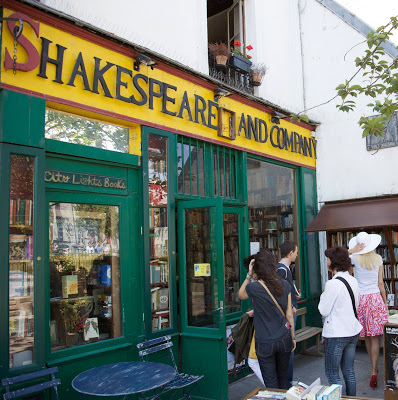 Heaven on earth I tell you. Look at the stack 0′ books! It puts my leaning tower to shame! 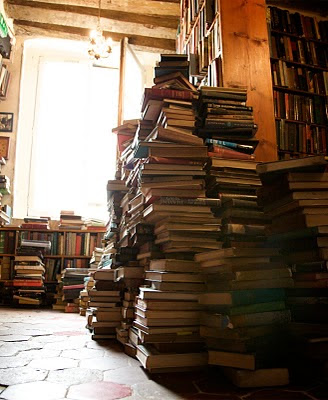 I’ll take this room with a view. 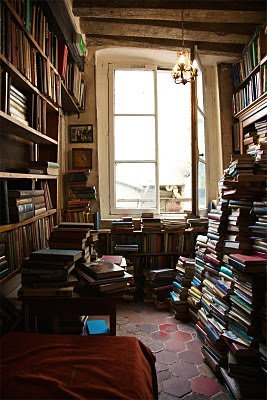 The only way my husband convinced me to leave was bribery with my other vice (um, not the art supplies one, the sugary one) – ice cream. Don’t judge. We’d just had a 12 hour plane ride.

Posted via email from Another Gray Day 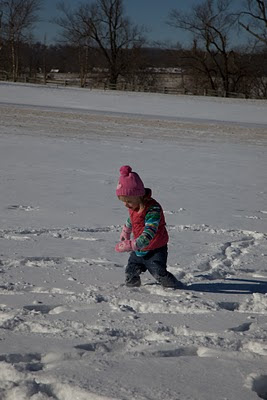 We don’t get a ton of snow where I live (usually ice), so this Christmas was a special treat. 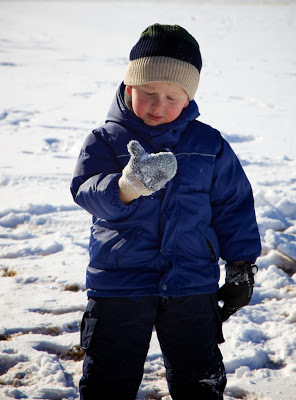 (Nixing the fact that my husband came down with the stomach bug at 3 AM Christmas morning. I have a deeper respect for you single parents doing holidays solo.) 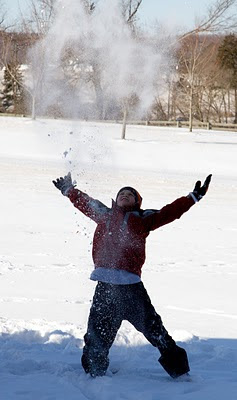 However, we were blessed that morning to wake to a yard covered with white. Somehow in the midst of the chaos, I was able to take a mere 233 pictures! (No worries. I’m not posting them all here. They’re, ah, for the grandparents.) 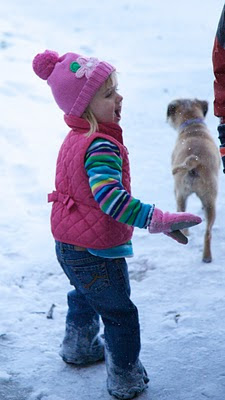 After the great gift wrap clean up and frenzy of finding snow clothes that fit (the boy in blue above has mismatched mittens), snow angels were made. Icicles were plucked, if that’s what you call it. 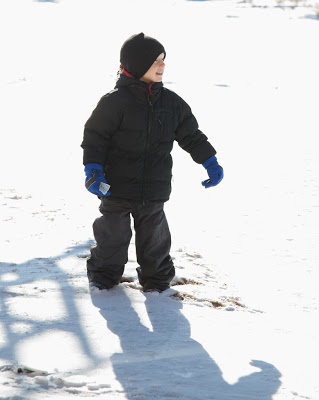 Thanks to Hubby who warned the camera was on the wrong setting. I’m sure he saved our pictures (all 233 of them) from certain doom.
Hope you are healthy and warm and consuming hot cocoa with marshmallows. And reading tons of great books. I have four going at once. (It’s starting to drive me crazy.)